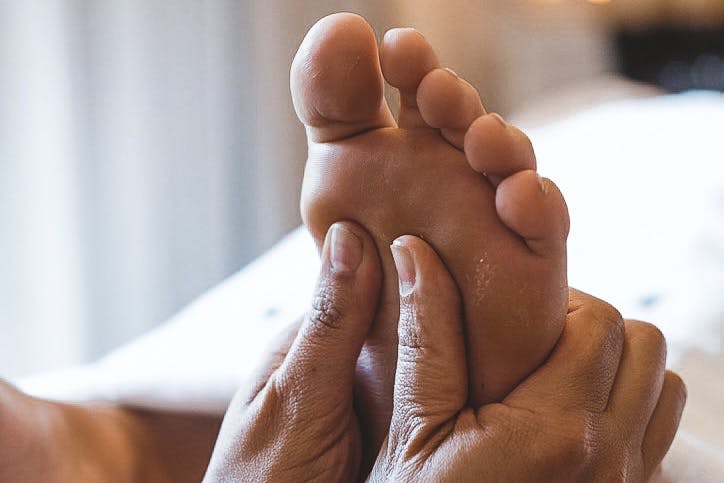 While many of us think of it as a form of foot manipulation, what exactly is a reflexology massage and what does the treatment actually do?

Whether you’re wondering about how this form of therapy differs from a Thai foot massage, or interested in the different types of reflexology massage, this guide is for you. To find out all the benefits you can expect, read on to learn everything you should know about this ancient technique with its roots in Chinese medicine.

Discover whether a reflexology massage could be suitable for you, as well as how and why this respected type of therapy is used to relieve pain and stress while restoring the body’s natural balance.

What is a reflexology massage?

Reflexology massage techniques focus on applying pressure to specific areas of the body. These are thought to be connected to various parts of the body, such as the muscles, joints, spine and organs. No oil or lotion is normally used by a reflexologist.

There are several theories as to why reflexology can have a positive effect on the body. According to traditional Chinese medicine, the technique can restore the natural flow of energy (or ‘chi’) through the body, restoring balance and reducing stress.

Other theories centre on the fact that the body is divided into vertical zones that are connected to certain points on the feet and hands. Scientists have also proven that internal organs are connected to the skin by nerves, while some believe that the technique’s success may be down to the healing power of touch.

Ok, so what is the difference between a Thai foot massage and reflexology?

In Thai foot massage, oil is combined with firm, fluid strokes to ease tension and relax the feet. The aim is to soothe this area of the body, rather than corresponding with specific areas  of the body via pressure points found on the feet, hands, face or ears.

During a typical reflexology massage, reflex points on the foot are subjected to gentle pressure. Each of these points is said to be connected to a specific part of the body, including internal organs. The aim of the therapy is to reduce stress while alleviating minor ailments.

Your experienced therapist may pull on the toes, push into the arch of the foot, massage the heel area or manipulate the ball of the foot. This is designed to give you the ‘feel-good’ factor, but also aims to go much deeper than that. It can release tension felt all around the body, from the soles of the feet to the top of the head.

Reflexology techniques may also be carried out on the hands or face, in addition to the feet.

Many people who have experienced a reflexology massage report an overall sense of well-being following treatment. It’s commonly accepted that reflexology can reduce pain and stress while improving the mood of the person receiving the massage.

Other reputed reflexology massage therapy benefits are wide-ranging. Patients have credited the technique with boosting their immunity, improving digestion, easing spinal pain and arthritis or recovering from colds and infections.

Additional reflexology massage benefits reported by some include restoring hormonal balance, boosting fertility, clearing up sinus problems and even fighting cancer. In the case of the latter, the peripheral neuropathy caused by some cancer treatments may be reduced by reflexology.

Other improvements include general body functions such as blood circulation, brain power, metabolism, nerve function and the elimination of toxins.

Some say that everyday aches and pains such as arthritis, headaches, back pain or the symptoms of menstruation or pregnancy are alleviated somewhat after a reflexology session.

Medical experts claim that the way the nerves are stimulated during reflexology can prompt the body into healing itself. This is because the treatment stimulates circulation, while sending a clear message to the central nervous system that acts like something of a wake-up call.

Are there any side effects to reflexology?

Recurring side effects of reflexology massage include tenderness in the feet as well as mild lightheadedness. Some also report feeling a heightened state of emotion following treatment.

Reflexology side effects are few, and tend to be short-lived. Overall it is a safe technique and suitable for most people. For some, however, it’s advisable to consult a doctor before embarking on a course of treatment.

This is particularly the case for patients who have foot problems such as athlete’s foot or infections, circulatory issues, ulcers or open wounds. Anyone who has inflamed leg veins or blood clots should also proceed only on a doctor’s advice.

Other contraindications include gout, epilepsy, thyroid issues and any blood problem that makes you more prone to bleeding or bruising, such as a low platelet count.

Can you get a reflexology massage while pregnant?

In general the answer is yes, though it’s imperative to let your therapist know so they can make an informed decision about whether or not it’s safe to treat you.

For this reason, reflexology has been used by some in an attempt to induce labour. If you want to try this you should proceed only with a doctor’s approval.

Secret Spa reflexologists use the technique with the aim of restoring the body’s natural balance, improving function while reducing pain and stress in the process. If you’d like to try out this non-invasive and relaxing form of treatment, why not try a reflexology massage today?